After a very long day of work, school, and freelance copy-editing, I looked forward to taking a long, hot shower and reading a book in bed.

Then I found this. 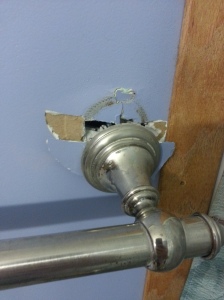 I knew immediately who the guilty party was and would deal with him in the morning. In the meantime, I didn’t relish having to tell Rick, who was at his night class after a long day of work and doing an emergency repair on our roof.

Much later that evening, Rick and I started reminiscing over the years…

Which kid kept flushing paper towels down the toilet and we had to keep snaking the drain?

Which little boy took his crayons and colored on EVERY living room wall when I took a quick bathroom break?

Which kid was it who dropped toilet lid into the tank which busted a huge whole in the bottom that caused that massive water leak in the downstairs ceiling?

After the laughter subsided and Rick fell asleep, I realized at the time we were angry and annoyed. The kids didn’t listen which cost us money and time, and resulted in more work for Rick. But in time, we laughed at the memory.

This morning, when the two innocent parties saw the towel rod in the bathroom and learned it was caused by someone trying to zip-line his way out of the shower, we had a good laugh…after the guilty one was lectured and disciplined, of course.

I guess the lesson in this is to learn to laugh at life’s challenges. Quite a few of them become quite funny given enough time. I just wish our funniest family stories didn’t involve property destruction.

How about you, reader? What’s something that really toasted your biscuits at the time but is funny now?